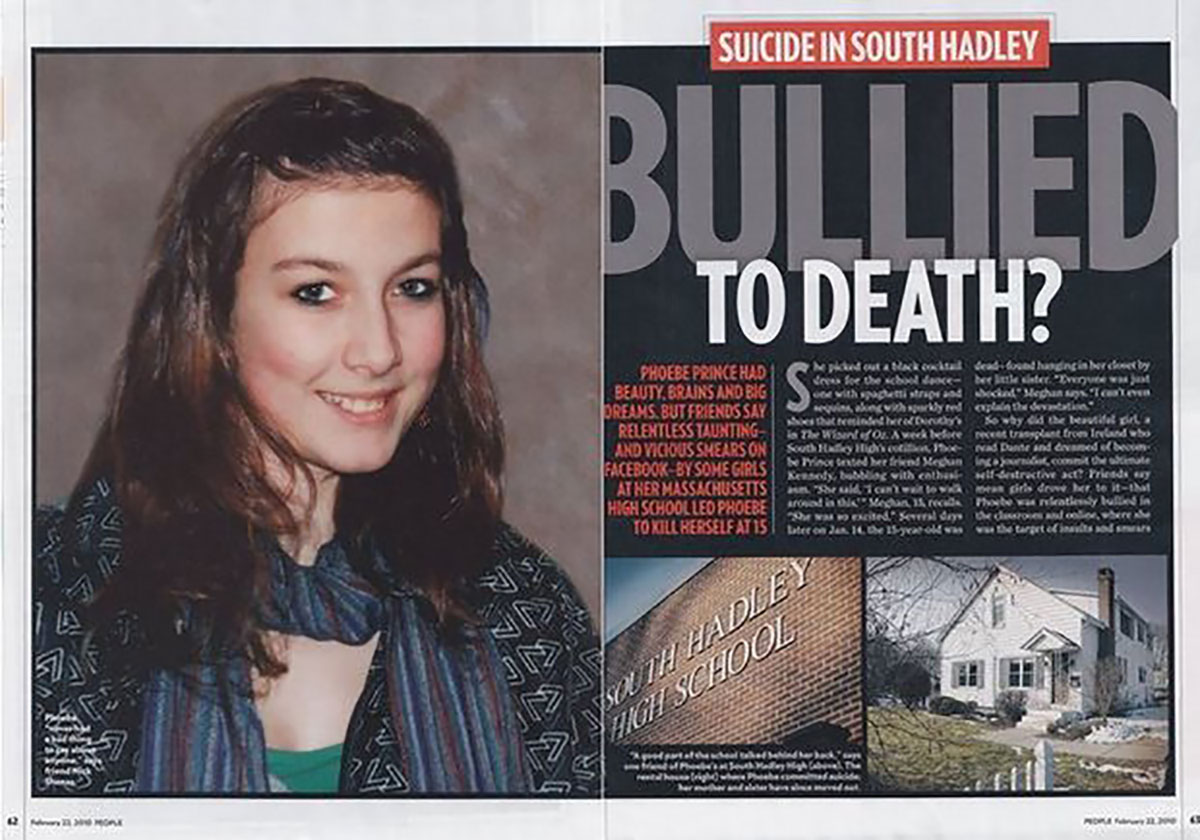 I read an article in People Magazine about the horrific consequences of bullying.

People Magazine did a special report on the subject after receiving a tremendous response from its concerned readers in reference to the suicide of Massachusetts resident, 15 year old Phoebe Prince. She was taunted and harassed by fellow students and as a result, hung herself. According to the article, two other teenagers committed suicide in the United States this past October. The numbers for October could be higher, I do not know. I certainly hope not.

How can we put a stop to bullying in schools and in our work force? YES…our adult work force. Adults can be bullies also. It is amazing to me. I would think that it would be foolish to believe that adults can be bullies…however they can be terrible bullies at times. They can make a person’s time at work pure hell. When a reformed teenage bully, Daniel Harrison, was interviewed by People Magazine about “why” he chose to be a bully, he said it made him feel confident and powerful. Adults who are bullies are also seeking to feel confident and powerful when preying on the kinder less aggressive people in their midst. It shows just how insecure these people actually are, but when you find yourself being victimized by them, it is difficult to see their vulnerable side. WE are made to feel vulnerable by them, which is the bullies’ goal.

Ellen DeGeneres stated in the article that “this has to stop.” Easier said than done….however, the Massachusetts school system has taken serious steps to try to alleviate the problem and hopefully prevent any other students from committing suicide.

The high school where Phoebe attended formed an antibullying task force. Antibullying measures are now being passed throughout the U.S. in schools, which is excellent. However, the lessons begin at home.

There are many GREAT things that teenagers and adults do in their communities daily to help promote kindness and good works for others, but after reading this article apparently there is still a repulsive amount of aggression and meanness permeating our society. Kindness truly IS contagious and just as the reformed bully in People Magazine, Daniel Harrison turned his life around, others who bully can choose to do the same. Daniel said that he felt confident and powerful when bullying…however after turning his life around and joining forces to stop bullying he stated that, “Now I befriend the people being bullied.” He said, “It’s satisfying to help people out.” Being kind to others promotes the same feelings of confidence and power although 100% more intense. Being kind produces a natural high and I wish those who bully others, both teens AND adults, would witness for themselves how much MORE confident and powerful they will feel by exercising kindness! You will become addicted to being kind…and that is a good thing!

An excellent book for teens to read [and adults] is written by Ben Mikaelsen titled “Touching Spirit Bear.”

Daniel said that this book is what turned his attitude to gratitude rather than anger. His language-arts teacher Laurie Hogan-McLean assigned Daniel a project which was to write a letter to the author of “Touching Spirit Bear” and how it proved to be an inspiration to him. Daniel wrote to the author and his letter took top state honors in the national Letters About Literature contest! Yay Daniel! Keep the kindness going and I hope this story proved inspiring to my readers!

My Kindness sent 2U…
Lorraine

Here are additional links with information which will help to alleviate bullying: